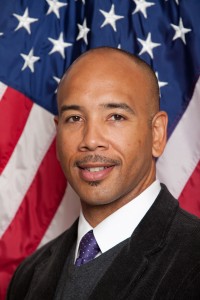 Ruben Diaz Jr. first entered public office as a member of the New York State Assembly in 1997, and is currently serving his second full term as Bronx Borough President, having been reelected in November 2013 with more than 89 percent of the vote.

As borough president, Ruben Diaz Jr. has led the implementation of a robust agenda—on economic development, housing, education, and public safety—in every corner of the borough. The Bronx has seen over $7 billion in new development of all kinds since Borough President Diaz took office in 2009. This includes more than $600 million in housing, building nearly 13,000 new units, and the creation of more than 15,000 new jobs.

More than 14,000 new jobs have been created in The Bronx since 2009, thanks in large part to the continued partnership between Borough President Diaz, the Bronx Overall Economic Development Corporation and those seeking to do business in the borough. Major projects such as FreshDirect, the Kingsbridge National Ice Center, new retail developments in every corner of the borough and the Cary Leeds Tennis Center in Crotona Park are among the major contributors to the “New Bronx” renaissance, led by Borough President Diaz.

Borough President Diaz has also put forward a robust legislative agenda, having led the charge for a new “living wage” law in New York City, which passed in May 2012 and requires developers that receive heavy taxpayer funding for their project to pay the employees of that development a “living wage.” Borough President Diaz has also put forward legislation to create a public registry of felony gun offenders and curb illegal dirt bikes and ATV’s on our streets.

The borough president has also implemented several bold health initiatives, including the Bronx CAN—Changing Attitudes Now—program, which aims to make small changes in the lives of Bronxites, leading to greater health improvements in the long term. Borough President Diaz has also sponsored the creation of the Community Board Athletic Leadership League, or C-BALL. The goal of C-BALL is to promote physical activity through basketball while facilitating engagement within our community boards and with city agencies, such as the NYPD. Sponsoring partners include The Coca-Cola Foundation, Montefiore Medical Center and Healthfirst.

Since taking office in 2009 Borough President Diaz has provided millions in funding to projects of all types in every Bronx neighborhood, including new technology upgrades to borough schools, green roofs and boiler upgrades, park improvements and more. Borough President Diaz has also created a Public Housing Advisory Council, which meets to discuss and find answers to the issues faced by the residents of the borough’s public housing buildings; and an African Advisory Council, which works with the Bronx African community to resolve its emerging issues and make recommendations on strategies to improve the quality of life of this growing population.

Throughout his seven terms in the State Legislature, Ruben Diaz Jr. was a champion for working families in the Bronx. He demonstrated a passion for constituent service, social advocacy and community empowerment balanced with support for sensible, green economic development and job creation programs. He sponsored and secured passage of important and innovative laws to address the consequences of the intolerable levels of asthma in the South Bronx, healthcare insurance fraud, and quality of life concerns.

Borough President Diaz has proven himself to be a fearless and tireless advocate for justice and equality for all. A staunch defender of the environment, he is a leading voice against environmental racism and injustice and helped lead the fight to restore the Bronx River. Due to his tireless and relentless advocacy in the case of his constituent, Amadou Diallo – a law-abiding young African Bronx resident who was wrongly killed by four NYPD officers in a hail of 41 bullets – Ruben Diaz Jr. became known around the world for his advocacy for civil and human rights.

In the State Assembly, Ruben Diaz Jr. served as Chair of the Committee on Election Law and on the Assembly’s Standing Committees on Education, Ways & Means, Children and Families, Environmental Conservation and Transportation. He was also a member of the Assembly’s Puerto Rican and Hispanic Task Force and the Black/Puerto Rican and Asian Legislative Caucus.

A lifelong resident of the Bronx, Borough President Diaz lives in the Southeast Bronx with his wife Hilda Gerena Diaz and their two sons, Ruben Diaz III and Ryan Isaiah Diaz. He graduated from Lehman College, City University of New York, with a Bachelors degree in political theory. Borough President Diaz is also the recipient of honorary doctoral degrees in civil law from Berkeley College and Mercy College, and a doctoral degree in humane letters from the Metropolitan College of New York.