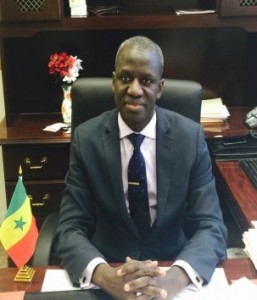 His Excellency Mr. Elhadji Amadou Ndao was born and raised in Senegal, West Africa, where he attended primary and secondary school. After graduating high school, he went to the University of Dakar where he, along with other thirty two elite students in the literary track, had the privilege to be of the class that would be the first promotion of the Sociology Department newly opened at the renowned “Faculté des Lettres et Sciences Humaines” at the University Cheikh Anta Diop of Dakar.

A year into it, he had the opportunity to travel to the United States of America in the pursuit of a higher learning. A higher leaning indeed, for beyond obtaining his B.A. in International Relations at the City College of the City University of New York, he had the pleasure to experience the American culture in its fullest sense: The New York City experience.

After graduating from City College Mr. Ndao served for various NGO’s, Action Against Hunger –USA and The Humanist Center for Cultures, in their communications  department before joining the United Nations Secretariat in 2011. At the UN, Mr. Ndao worked in the Department of Management  for two years and then joined the Executive Office of the Secretary General, Every Woman Every Child team in the Strategic Planning Unit.

His Excellency Mr. Elhadji Amadou was appointed Consul General of the Republic of Senegal by Executive Order of His Excellency President Macky Sall on January 7th 2015 and took office on January 30th 2015.