We are pleased to Announce that the U.S. Department of Commerce, Minority Business Development Agency (MBDA) is supporting the African Union Expo and Martin Ezemma, MBDA Business Development Specialist,  the Agency’s expert in the African Diaspora will be leading the Q&A discussions and his extended team will be delivering several of the sessions related to Exports/Imports, Trade and Investment.

The Minority Business Development Agency (MBDA), a job-creating agency, leads Federal efforts to promote the growth and global competitiveness of America’s minority business community. This summary includes a small portion of our overall accomplishments during the first three years of the Obama Administration. 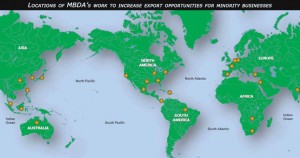 Today, the importance of minority-owned businesses as a key component of U.S. international trade has nev-er been greater. Minority-owned firms have the most favorable export attributes of any sector of the U.S. economy and represent the future of export growth. They are:

Profile: Dennie Beach We are pleased to announce the support of the U.S. Small Business Administration,...
Scroll to top